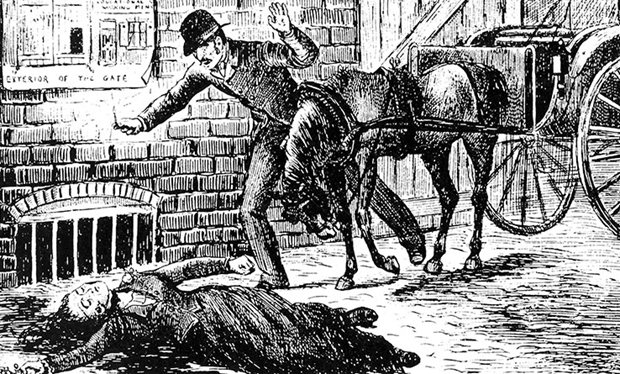 Did Sherlock Holmes creator Sir Arthur Conan Doyle and his friend and mentor Dr Joseph Bell correctly deduce the identity of the most infamous serial killer of all time, Jack the Ripper? Author Diane Madsen believes exactly that and has dramatised her ideas in her new book The Conan Doyle Notes: The Secret of Jack the Ripper.

Doyle was a clerk under Dr Bell at the Edinburgh Royal Infirmary during the late 1870s and credits the pioneering forensic scientist as a key inspiration for his literary detective and his renowned methods of deductive reasoning. After Bell’s status as ‘the real Sherlock Holmes’ became public, he was one of the medical experts called upon for help by Scotland Yard during the Ripper investigation into the murders of five prostitutes in London’s Whitechapel area in 1888. Meanwhile, Doyle himself is said to have later been taken on a tour of the same East End streets where the killings took place by a police detective who had worked on the case.

And Madsen believes the pair used Bell’s Sherlockian methods to independently come up with the same suspect. “Bell said that he had a ‘friend who liked puzzles’, and they both investigated the files,” says Madsen. “They researched everything and then they each wrote their suspect’s name down on a piece of paper, put it in an envelope and exchanged envelopes – and they both identified the same suspect.”

Bell duly filed a report to Scotland Yard, and soon afterwards the murders stopped. But no such document has ever been found among the case files, and Madsen believes this points to an official cover up. “All of this fits in with there being some kind of a police conspiracy because the report was never publicised,” says Madsen. “It’s no longer in the files, apparently, nobody has seen it, nobody has talked about it, yet he says he made a report.”

But if Conan Doyle was indeed the “friend who liked puzzles”, as Madsen believes, why did he not reveal the results of his and Bell’s deductions? Surely the man who created Sherlock Holmes, a character whose raison d’être was the pursuit of truth and justice, would have felt compelled to share his findings about the real-life crimes?

“When I first told my theory to a really well-known Sherlockian, he told me that I could not propose a theory where, if Conan Doyle knew the name of the Ripper, he would not announce it,” says Madsen.

But she argues that it is precisely because of the identity of Doyle and Bell’s suspect that they refrained from going public. As expanded upon in her novel, Madsen believes their investigations led them to one James K Stephen – tutor to Prince Albert Victor, son of the Prince of Wales – and that Stephen’s royal connections could have been behind Doyle’s decision to stay quiet, for fear of causing a scandal.

“I believe that Sherlock Holmes’s moral compass was based on the Victorian code and who more embodies the code of ethics – God, King and Flag – than Conan Doyle? I believe that if the government had asked Conan Doyle to be quiet he would have done. And he was no doubt a royalist.” In the first ever Sherlock Holmes short story, A Scandal in Bohemia, the detective protects (if somewhat begrudgingly) the head of a European royal house, while in 1904’s The Adventure of the Second Stain he comes to the aid of the government in a case of national security following a personal visit to Baker Street from the prime minister. And in one of his final outings, His Last Bow, Holmes fights for King and country, joining the war effort as an Allied spy.

If even an iconoclast like Sherlock Holmes exhibited a certain degree of deference to royalty and the British establishment, it seems likely that the man who created him, and who seemed to so relish writing about such encounters, would have been significantly more devoted. But even if Madsen’s theories do hold water up to this point, what of the recent well-publicised claims that a Polish barber named Aaron Kosminski was in fact the Ripper?

Published in September, the book Naming Jack The Ripper by Russell Edwards claims that DNA found on a shawl that supposedly belonged to Ripper victim Catherine Eddowes connects it to her and proves Kosminski was the killer. But Madsen points out that since Eddowes was a prostitute living in the same area as Kosminski, she could quite easily have encountered him as a client, hence his DNA being present on the shawl.

And while Madsen would be the first to admit that she, like Doyle, is an educated amateur enthusiast rather than a professional detective (consulting or otherwise), she is not the only one casting doubt on Edwards’ findings and Kosminski’s guilt.   DNA experts including Professor Sir Alec Jeffreys, the inventor of genetic fingerprinting, believe that Dr Jari Louhelainen, who was commissioned by Edwards to perform the tests on the shawl, made a basic mistake and misidentified the mitachondrial DNA sequence he was using to connect the shawl to Eddowes.

Professor Jeffreys told The Independent that if Louhelainen’s methods are indeed flawed in the way they appear to be “then obviously there is no significance whatsoever in the match between the shawl and Eddowes’ descendant, and the same match would have been seen with almost anyone who had handled the shawl over the years.”

It seems, then, that 126 years after those terrible months in Whitechapel, the identity of Jack the Ripper continues to be a mystery. And yet for Sherlock Holmes fans there remains the tantalising suggestion that it has already been solved – by the man who created the great detective and the real-life deductive genius who inspired him…

Diane Gilbert Madsen is the author of the DD McGil Literati Mysteries. Her book The Conan Doyle Notes: The Secret of Jack the Ripper is available on Amazon. https://www.amazon.com/Conan-Doyle-Notes-Literati-Mystery/dp/1780926197/ref=tmm_pap_swatch_0?_encoding=UTF8&qid=&sr=