I had fun researching what typewriter Ernest Hemingway used early in his career. Much is known about his later typewriters – his Underwood Portable, his various Royal typewriters (one of which is still in his office at the Key West Home and Museum), and his famous Swedish Halda typewriter (sold at auction in 2008) on which he typed The Dangerous Summer –  but not much was known about what typewriter he used for his early work. 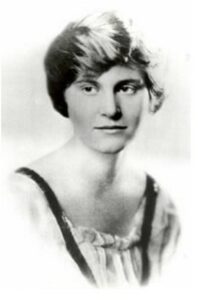 I found that Ernest’s then fiancée, Hadley Richardson, had given Ernie a typewriter as a gift on his 22nd birthday, July 21, 1921.   She gave him a portable Corona #3.  He had asked Hadley for this specific model. 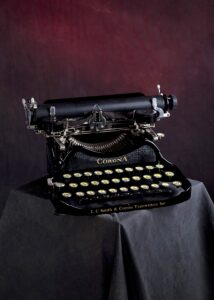 This was the perfect typewriter for Hemingway the reporter.  The Corona No. 3 carriage folded down, and it fit neatly into its case.  It was durable, compact, and perfect for a roving, traveling reporter.  With it, Ernie could easily send dispatches to his paper from the field.

Hemingway and Hadley were married in Horton Bay, Michigan on September 3, 1921.  He took the Corona number 3 along when he and Hadley sailed for Europe in December of 1921. 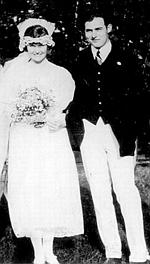 Hemingway loved his typewriter.  He sent a poem he wrote about his new Corona to Harriet Monroe in Chicago in February, 1922:

“The mills of the gods grind slowly;

Ugly short infantry of the mind,

This was the typewriter Hemingway had when he wrote The Sun Also Rises, published in October, 1926.  It sold out the first printing of 5090 copies, was banned in Boston in 1930, and by 1960 was estimated to have sold over 1 million copies. 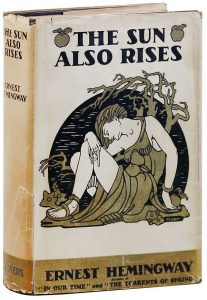 A. E. Hotchner, Hemingway’s friend and biographer, wrote that Ava Gardner once asked Ernest Hemingway  if he’d ever had an analyst.  Hemingway replied, “Sure I have.  Portable Corona number three.  That’s been my analyst.”

The Corona No. 3 was an instant success when it debuted in 1912 and about 650,000 sold over 30 yrs.  This machine was so practical that it was chosen by British Army in WWI. 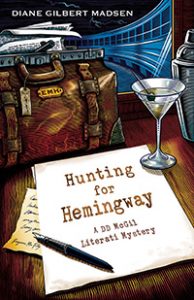 Hemingway’s famous lost manuscripts would have been typed on this Corona #3, and that’s another story.  Watch for my next blog on Hemingway in which I commemorate the 100th anniversary of their loss on December 22 1922.