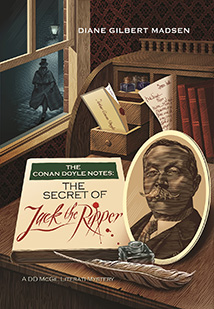 The Conan Doyle Notes: The Secret of Jack the Ripper uncovers clues as to why the dog did not bark in the night… Sherlock Holmes concluded that it was because the intruder was known to the dog. Madsen’s new mystery questions whether the identity of one of the greatest criminals of all time, Jack the Ripper, was deduced by Conan Doyle. Conan Doyle was already famous with his popular Sherlock Holmes stories when Jack the Ripper struck London in October 1888. So why was Conan Doyle silent about this case? This thrilling adventure may well hold the key…

“Diane Gilbert Madsen’s ‘The Conan Doyle Notes: The Secret of Jack the Ripper’ was the best book I’ve read in a long, long time. I was hooked by page six and couldn’t stop reading. Spellbinding, intriguing and with a beguiling wit, Ms. Madsen delighted me to no end. “ — Catherine Lanigan, author, Romancing the Stone, The Jewel of the Nile and Love Shadows.

“Who was Jack the Ripper? Was Sir Arthur Conan Doyle protecting his identity? Conspiracies abound in this intelligent thriller that will make you think twice the next time you read a Sherlock Holmes’ mystery.”
—Steve Alten, best-selling author of MEG & THE OMEGA PROJECT

“The Conan Doyle Notes: The Secret of Jack the Ripper” is an expertly written novel that pays full homage to one of literature’s greatest characters and the author who created the deductive genius of Sherlock Holmes. It should be considered a ‘must read’ by the legions of Conan Doyle fans and would be an enduringly popular addition to community library collections.” —Midwest Book Review – Volume 13, Number 7

“This is an excellent book, one of the most accomplished and cleverly written books I have read in a while. The main DD story grips you from the first few pages and continues at pace very cleverly. The second story which gets intertwined to the first, relating to Conan Doyle and the Secret of the Ripper, is extremely cleverly written and very well researched. I also like the headings at the start of every chapter from Doyle’s novels.”
— Bruce Johnson, Retired Scottish Policeman