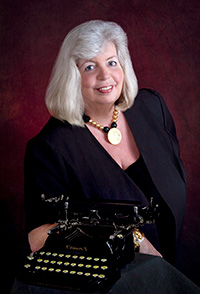 Chicago native Diane Gilbert Madsen brings a real feel for the “Windy City” to her DD McGil Literati Mystery series. Madsen attended the University of Chicago and earned an M.A. in 17th century English from Roosevelt University. She was Director of Economic Development for the State of Illinois and oversaw the Tourism and Illinois Film Offices during the time the Blues Brothers was filmed. She also ran her own consulting business and is listed in Who’s Who in Finance and Industry and the World Who’s Who of Women.

Fascinated by crime, history and business, her interest in writing murder mysteries was sparked when she met the suspect of a murder case that occurred near her home. The suspect was convicted then later exonerated of the crime, and the encounter caused her to rethink how people form their first impressions of murder suspects.

“A Cadger’s Curse,” is the first in the DD McGil Literati Mystery series.  Second in the series is “Hunting for Hemingway,” and the third is “The Conan Doyle Notes.”  “The Cardboard Palace – What Bram Stoker knew,” is forthcoming.  Additionally, Diane is in a number of anthologies including “About Being a Sherlockian,”  “About Sixty – Why Every Sherlock Holmes Story is the Best,” and “Holmes Away From Home, Vol 1.”  Another anthology, “Villains, Victims and Violets,” is forthcoming.

Diane, her husband Tom, and their Japanese Chin Angel now live in Florida at Twin Ponds, a five-acre wildlife sanctuary.